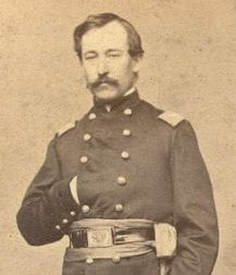 ​ George’s half-brother Henry Clay Ward would write of his brothers death: "He was wounded in the leg by a minnie ball on Thursday, about 6 o’clock P.M. The artery was severed and he bled to death. He fought well. He had sent his horse to the rear, and I felt then, that, if we should be obliged to retreat, it would be all up with him. He was wounded while fighting at the head of his brigade. The fight continued for five hours, and during the confusion we were unable to find him for two hours. I searched all over the battlefield, amid shells and balls, hunting for him. We got him to a hospital about dark. He was insensible, but the   surgeon gave him whiskey, which revived him; and he said to the doctor, “I shall not live two hours.” After this, his mind was wandering, and he imagined himself at the head of his brigade, commanding troops, and urging them to fight bravely. He died Friday morning at daylight."

Henry had commented in his letter "if we should be obliged to retreat, it would be all up with him." The reason for Henry's concern was during the battle of Ball's Bluff, October 21, 1861 George had be wounded in the left leg requiring an amputation. George would write his wife Emily, "I was wounded in my left leg and it was so badly splintered that they amputated it about half way between the knee and ankle." Provided a prosthetic leg, George would recover from his wound at his home in Worcester. However this prosthetic leg would limited Ward's mobility at Gettysburg. During the attack of Wright's Brigade, while dismounted, Ward would be fatally wounded in the back of the right leg. Leaning on a cane held in his left hand, and a sword in his right, he could not walk. Colonel Ward would be carried to a field hospital where he would die of his wounds.

The family held a funeral service on July 14, 1863, at the Salem Street Church. The Worcester Spy, 15 July, 1863 would record: The great sorrow at the death of Col. Ward and the general sympathy with his mourning relatives, were manifested by the attendance of a large concourse of people at his funeral Wednesday afternoon. The streets, too, were filled with people who, from whatever motives they may have collected, could not fail to be most deeply impressed with the solemn spectacle of the funeral procession, with its mournful music, the brave heroes following their comrade to his last resting place, the riddled colors of the regiment, and the long train of relatives and friends.......The coffin on which were two swords, the cap and other military equipment of the deceased, was draped in the American flag, and covered with a profusion of white wreaths and bouquets. Surmounting the pulpit, on each side, were displayed the tattered and battle-stained standards which the Fifteenth bore so proudly through our streets two years ago, the gift of the ladies of the city.

Following the service at the church a hearse, drawn by four horses, would be draped in the American flag. Immediately following it came carriages with wounded officers and soldiers, among them were Capt. Prince and Lieutenant Dudley who had been with the Colonel at Gettysburg. The procession would pass through the streets now lined with many onlookers as the church bells tolled.
Ward's remains were interned at the Worcester Rural Cemetery, Worcester Massachusetts.