The Michigan Cavalry Brigade monument now sits nearly three and a half miles east of Gettysburg's town circle. The construction of this impressive monument was complete in early January, 1889.

The Michigan Brigade’s Fine Monument.
"The finest Calvary monument on the battlefield at Gettysburg was finished Friday last it is that of the Michigan brigade commanded by Gen. Custer and which took part in the Calvary fight east of town on July 2 (should be 3rd). The memorial is Barr granite 12 feet square at the base and 46 feet high. Above the die are four columns, the figure of a dismounted cavalryman forming the cap-piece. On the front face of the die is set a large bronze medallion of general Custer."
The National Tribune 10 Jan. 1889

The formal dedication of the monument was held June 13, 1889.

Several unique and often overlooked features of the monument include the detailed bas-relief of Custer, and the now famous cavalry charge. Depicted on the south side of the monument is the low relief of the "Tuebor" badge worn by Custer. Atop the monument is the detailed statue of a cavalryman overlooking the battlefield. These features and others make this monument very distinct.
On the south side of the monument is the relief of the badge worn by General Custer during the Civil War. The iconic Custer "Tuebor" Medal (Latin for "I will defend") is in the shape of a Maltese cross beneath a five-pointed star representing Custer's rank as brigadier general. The motto was derived from the Michigan state seal adopted in 1836 and commemorated the prominent role of the Michigan Territory against the British and their Indian allies during the War of 1812.
Custer would have a smaller example of the badge made for his wife by Tiffany & Company. Custer would also present similar examples usually with a specific regimental number to various Michigan officers that served under him. 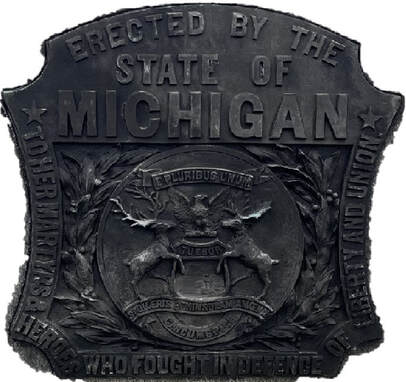 State of Michigan Gettysburg monument plaque.
The circular State Seal of Michigan was placed inside this specially designed plaque that adorns the Michigan Monuments at Gettysburg. First, this plaque notes the monuments that were erected by the state of Michigan.
In addition, around the outer profile of the plaque it reads "TO HER MARTYRS & HEROES WHO FOUGHT IN DEFENSE OF LIBERTY AND UNION." This design is unique to Michigan monuments. Most other Northern state monuments use their respective state seals without modifications or addition notation. 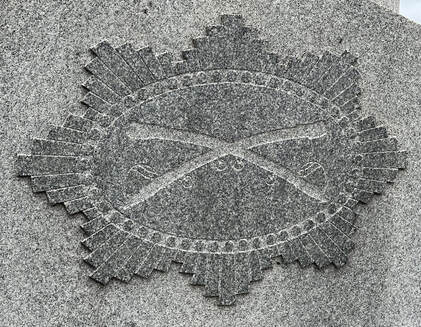 Cavalry Corps Badge
Located on the east side of the monument is a low relief depicting the Cavalry Corps Badge. This symbol is also often referred to the "Sheridan Cavalry Corps Badge" named for Maj. General Philip Sheridan. With the request of U.S. Grant in 1864, Sheridan would command the cavalry with the Army of the Potomac. ​