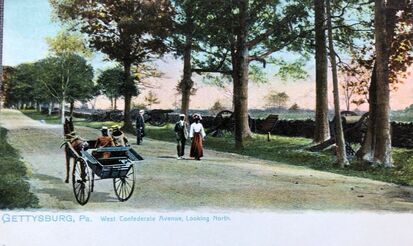 Colored post card view of West Confederate Avenue looking north. gettysburgremembered.com
West Confederate Avenue as we know it today runs north to south along Seminary Ridge. It marks the main line of battle for Confederate troops that launched attacks on July 2 & 3 and occupied in defense on July 4,1863. As the battlefield park grew, thoughts of constructing access to the main southern line began.
As reported in the October 2, 1900 annual report by the Gettysburg Military Park Commission, "The land along the summit of Seminary Ridge having recently been acquired by the conclusion of the long and pending condemnation cases, a contract has been made for the construction of an avenue 20 feet wide and two miles in length along the ridge, and work thereon has begun." The same Commission, one year later would report on October 1, 1901 "The avenue known at present as West Confederate avenue and mentioned in our last report as being under construction has been completed."

A view of the construction of West Confederate Avenue.
The construction of most avenues at Gettysburg were based on the Telford (Thomas Telford) system. The Telford design required a large stone foundation with small stone fragments wedged tightly in the interstices. On top of this base would be smaller stones being rolled hard and smooth. The Commission noted in its October 1, 1901 report, "Like all avenues, it is constructed on the Telford system and will last for centuries." Those that constructed these avenues could not have imagined the hundreds of cars and buses traveling these roads annually. They have held up well. 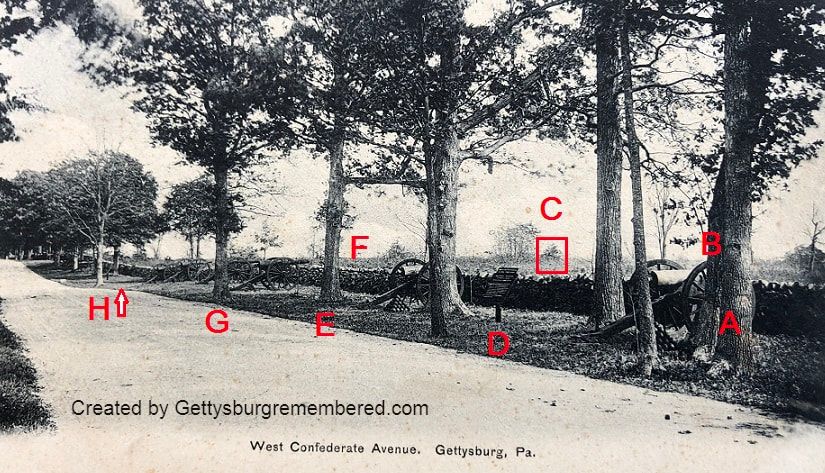 c1910 post card with noted items of interest.
Noted in the above photo are a few items of interest.
A. Original tree in post card view still present. Note how tree "A" is covering tree "B". There are actually two trees.
B. Original tree still present.
C. Location of current North Carolina Monument dedicated in 1929.
D. Iron marker for Graham's Battery part of Poague's Battalion. This battery had two 12 Lbs. Napoleons (in photo) and two 12 pound howitzers. Only the Napoleons were engaged.
E. Original tree still present.
F. Stone wall still present. Not the height of the stone wall to current height.
G. Original tree to the right of Wingfields Battery part of Lane's Battalion. This battery employed two 20 Lbs. Parrott rifled cannon as well as three 3" Navy Parrots.
​H. Current entrance to view the North Carolina State Memorial.

President John F. Kennedy Visits Gettysburg.
President John F. Kennedy would visit the Gettysburg National Military Park on March 31, 1963. Battlefield Guide Jacob Sheads would provide a tour to Kennedy and several family members. President Kennedy would be photographed as he stopped along West Confederate Avenue. The President is pointing in the direction of the North Carolina State Memorial. Jackie Kennedy and daughter Caroline were present during the tour. In the background of both photographs the cannons of Ross's Battery part of Lane's Battalion can be seen. At the time Kennedy visited the battlefield, avenue traffic was allowed to go both directions.