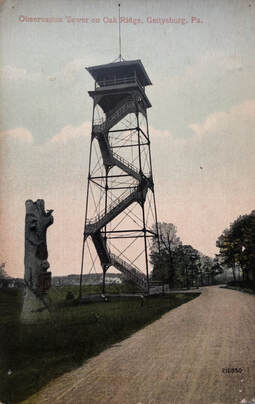 Original Observation Tower on Oak Ridge. gettysburgremembered.com
Around 1895 observation towers were constructed by the U.S. government on the Gettysburg Battlefield with the intention "to afford the observer a complete and satisfactory view of the entire scene of the great battle and enable him to get consistent and accurate idea of it as a whole." Originally, there were five towers constructed. These towers were constructed by the Variety Iron Works of Cleveland Ohio.
These five towers were located at:
Top of Big Round Top (removed 1968)
Zeigler's Grove (removed 1961)
Top of Culp's Hill (still remains)
Northern Oak Ridge (shortened to 25' 1968)
Seminary Ridge (still remains)
Today only 2 full size and one half size tower remain. The Oak Ridge Tower originally stood approximately sixty feet in height. In September of 1968 the Schlesser Demolition Company would reduce the height of the tower to 25' as well as demolish the Big Round Top Tower and rebuild the Culp's Hill Tower. Park officials sited that the reduction in height of the Oak Ridge Tower would still provide as good a view and would be much easier to maintain.
​​ 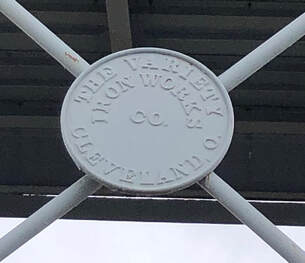 Identification plaque for the Variety Iron Works Company of Cleveland Ohio located on the Oak Ridge tower. This company would construct five steel towers on the Gettysburg Battlefield. 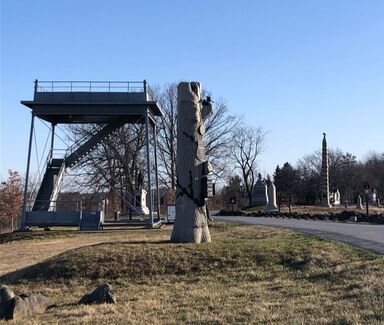 Current observation tower on Oak Ridge.
​Modern view of the Oak Ridge observation tower. The original tower stood 60 feet in height whereas the present tower stands approximately 25 feet in height. The original design of the stairs or entrance to the tower was located on the west side along the road. Today, the stairs have been relocated to the north side of the tower. 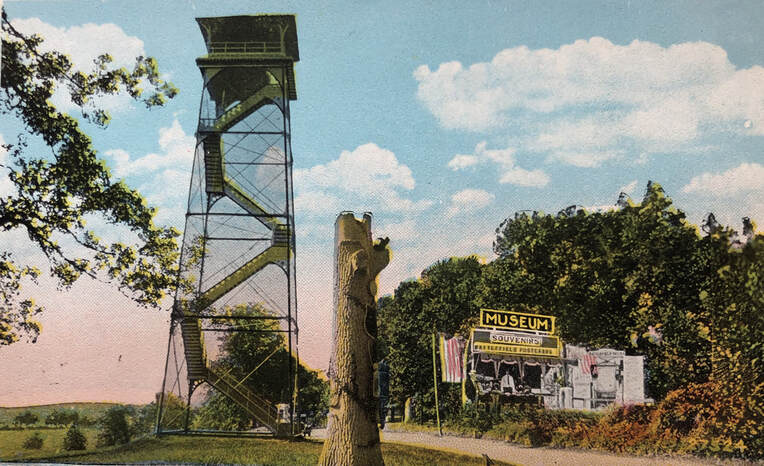 Across from the Oak Ridge Tower was the souvenir stand owned by Gettysburg's jeweler Penrose Myers.
Penrose Myers was a well know Gettysburg jeweler with a shop located downtown at 12 Baltimore Street. At first his goods consisted entirely of jewelry, but as interest grew with visitors venturing to the battlefield he began offering silver souvenir spoons. Often engraved simply "Gettysburg" these spoons brought unexpected growth. With the success of the souvenir business he would open a stand or "branch store" across from the Oak Ridge Tower (c 1928). This stand offered a free museum, refreshments and souvenirs and was only open during the tourist season. Myers would retire from the jewelry business in June, 1948. On Sunday October 4, 1948 only months after retiring, Myers would die of "coronary occlusion." On the day of his death Myers had enjoyed a "hearty dinner." After eating he had walked to his souvenir stand and spent over an hour there. Upon returning to his house he was stricken while sitting in his chair and pronounced dead at the age of 90. He is buried in Evergreen Cemetery in Gettysburg.

With a little investigation we were able to find not only where the stand had stood but also the main entrance to the stand. See below for details.
Then and Now:
Penrose Myers souvenir stand across from the Oak Ridge Tower. 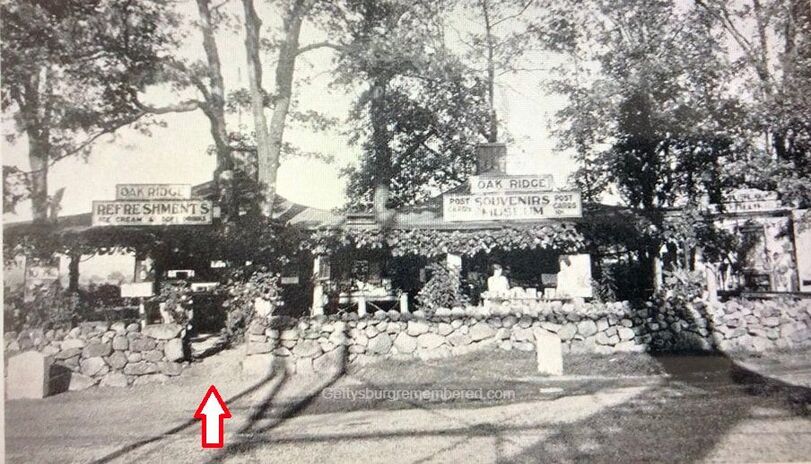