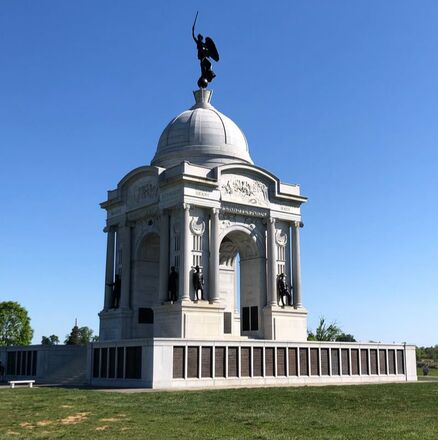 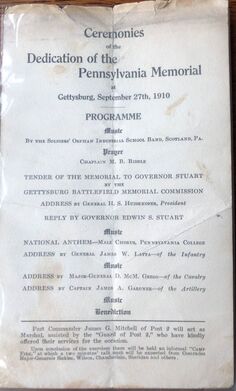 The Pennsylvania State Memorial at Gettysburg was dedicated September 27, 1910. Thousands of  veterans and visitors would attend the dedication ceremonies. The Philadelphia Inquirer would write "Standing in a blistering summer sun during the early part of the ceremonies and through a drenching rain toward the end, 20,000 Pennsylvanians, one-forth of them Civil War veterans today attended the impressive dedication of the State memorial to her men who fought at Gettysburg forty seven years ago". The dedication ceremonies included speeches from prominent officers and politicians. This included Major-General David McMurtie Gregg who spoke of the cavalry operations during the Gettysburg campaign. While General Gregg was speaking a heavy rain had moved in. The Altoona Tribute would write, "When the rain started to fall, General Gregg was speaking. Saying that he did not wish to keep his comrades in the rain he was about to stop, when from all sides came cries of Go on, go on from the men who fought with him.....and while he finished the old soldiers stood in the pouring rain, apparently oblivious of their discomfort."
​
Gen Gregg's service at Gettysburg is well noted. Gregg's 2nd Division would play a major role not only in the pursuit of Confederate Cavalry commander J.E.B. Stuart during his Gettysburg campaign movements but his refusal of Stuart's July 3rd, 1863 flank attack on East Cavalry Field.

​  Of the twenty eight bronze statues honoring General officers* on the Gettysburg Battlefield, only one was viewed by its subject. This lone honor belongs to Major General David M. Gregg.

* Although not Major Generals, Lieutenant Steven Brown, 13th Vermont Infantry would see his bronze likeness on the regimental monument at Gettysburg. Albert Woolson the last surviving veteran of the Grand Army of the Republic would sit for sculptor Avard Fairbanks as he would sketch Woolson's  portrait used for the GAR memorial at Gettysburg. 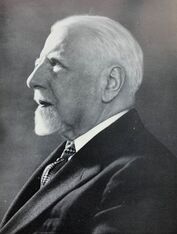 J. Otto Schweizer, sculptor of the Major General D. M. Gregg statue.
The bronze statue of General Gregg stands on the south-east side of the Pennsylvania State Memorial. The sculptor that modeled the "Gregg" was J. Otto Schweizer. On the Gettysburg battlefield, Schweizer would sculpt seven works, more than any other sculptor. Of Schweizer's seven works, three are present on the Pennsylvania State Memorial. Along with General Gregg are Abraham Lincoln** and General Alfred Pleasonton. As noted in the historical biography by Ernst Jockers: J. Otto Schweizer The Man and His Work it was noted, "Gregg who is old in age saw his statue in the artist's studio and who had graciously lent his mighty boots and saber for true-to-life representations, proudly praised his bronze double." This notation tells us General Gregg did indeed view and approve his bronze statue currently on the memorial.
​
​ The Pennsylvania State Memorial would be dedicated in September 1910 without the eight bronze statues in place. The statues after being cast by the Van Amringe Company, Boston Massachusetts would be placed on the memorial in late April, 1913. The intention was to have the statues in position prior to the great Gettysburg 50th anniversary reunion. General Gregg was to attend the 50th reunion but at the last minute his trip to Gettysburg was cancelled due to his poor health.

**A question that is often asked when viewing Lincoln on the front of the memorial is what document is he holding in his left hand? It was noted by Schweizer when he sculpted the Lincoln "It is nine feet high and represents the martyr President in the act of delivering his famous speech That this nation under God, shall have a new birth of freedom." The answer to this question is the Gettysburg Address. 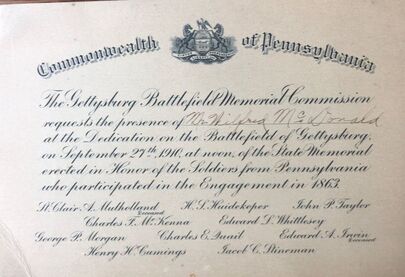 Invitation card sent to Sergeant Wilfred McDonald of the 118th Pennsylvania Infantry.
The State of Pennsylvania would send each living Pennsylvania soldier that had participated in the Battle of Gettysburg an invitation to attend the dedication. These men along with others would also have their names inscribed on the memorial plaques that surround the memorial. Sergeant Wilfred McDonald was a Sergeant in Company H, 118th Pennsylvania Infantry and would enlist August 6, 1862. He would be mustered out of the service June 1, 1865.
​  Battlefield Guide Bob Gale shared with me that Wilfred McDonald was born 18 March, 1839 in Philadelphia Pa. and would join his comrades on the "other side" 21 December, 1931. He now rests in Mount Mora Cemetery, St. Joseph  Missouri.
As veterans and visitors attended the dedication ceremonies many would purchase souvenirs or mementos of their visit. Several of these are shown below.