Images are not actual size.
​Medal diameter is 63.6 mm (2.50") Medal thickness is 4 mm (.16")
​“The location of the Pennsylvania State memorial has been selected east of Hancock Ave and South of Pleasanton Ave a situation satisfactory to the Pennsylvania state commission”
Report of the Gettysburg National Military Park Commission, July 1, 1909

With the construction on the Pennsylvania State Memorial it was decided to offer veterans and other interested people various celebratory mementos. One of the these was a  commemorative medal. The Gettysburg Battlefield Memorial Commission was authorized by the Commonwealth of Pennsylvania to create these medals. Jos. K. Davison's & Sons, of Philadelphia assumed the responsibility of issuing the Medal and commissioned French sculptor J. Edouard Roine' (1857 - 1916) to create the models. On the obverse, the head of General George Gordon Meade is modeled in strong relief and an artistic border showing the insignia of the Army Corps that fought at Gettysburg. The reverse shows the memorial also in high relief, with appropriate inscriptions. The Medals were to be made from either solid bronze or silver. The cost for the bronze Medal was $1.00 and the silver Medal $5.00.   The bronze example is shown.

The manufactures stamp "Davison Phila." was struck on the edge of the Medal.
A pamphlet was printed to describe detailed information in regards to the medal. This pamphlet even included actual size images of the obverse and reverse of the medal. 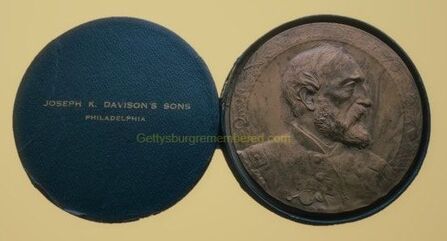 A specially designed paper container was provided for each of the commemorative Medals.
A specially designed, two piece paper container secured and protected the Medal. These containers were stamped on the cover with the manufacturer's name. Today these paper containers are very difficulty to find intact.
When considering this Medal was struck over 110 years ago, is has many interesting characteristics.  On the obverse, Meade's pince-nez glasses are slipped inside his coat. His double row Major General shoulder straps display two stars. Around the perimeter are Corps symbols of all of the Corps that served at Gettysburg. On the reverse is stamped "PENNSYLVANIA'S TRIBVTE TO HER HEROIC SONS   1863-GETTYSBVRG -1910" and the relief of the memorial itself.
The use of a "V" in the words pays homage to the Greco-Roman style that influenced the memorials design.